(Note: I wrote this for my non-fiction writing class a couple of months ago. Mangia!) 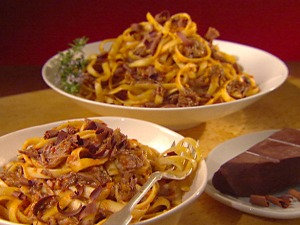 My parents are home in northern New Jersey, snowed in by a recent Nor’easter. My father posted the following on Facebook Friday evening:

The Carroll Center For Exceptional Grand Children reports that the storm is really roaring along here in Bloomfield! Below freezing now and headed down!!! Wind picking up!!!! I am under strict house arrest, so no out for dinner!!! But Mary’s home cooked dinner is full of old memories… Spaghetti and fish sticks and it isn’t even Lent yet!!! We are in the 6 to 12 area of the forecast!!! Throw another log on the fire!!!

There’s a lot to parse here- my parents have 8 (soon to be 10) grandchildren and said grandchildren occupy 92% of their time. My father is obsessed with his fireplace. He is also always freezing cold in the way that only those over 70 can be, and therefore the great room containing the fireplace is at a constant 85 degrees, rendering any visitors to pretend they are in Bali for the duration of their stay. And yes, he likes his exclamation points. I only recently got him to stop sending me texts in ALL CAPS so I am letting this one go for the time being.

But the salient point- fish sticks and spaghetti was a standard meal for me growing up- usually on Fridays during Lent but making sneaky appearances throughout the year. I didn’t realize how odd of a combination that was until relaying to my husband my childhood meals. He was not impressed. Well, impressed with the grossness perhaps. Honestly, I rather liked it- heavily breaded and baked fish accompanied by limp pasta, with any of those flavors drowned in overbearing sauce. If you liked Ragu, this dinner wasn’t a problem.

My mom is a first generation American, her parents straight off the boat from Ireland. My father claims that he taught my mother how to cook, her culinary knowledge not extending past the skill of boiling any taste, texture or life out of whatever items were available for a meal. It is important to note that my father is not exactly Julia Child. He once roasted a chicken on our grill without a pan underneath, allowing a grease fire to erupt and our neighbor to pronounce the chicken to be a fine looking London broil.
My father is the second youngest of five boys, sons of an NYPD officer and his homemaker wife. Dinner in his house was survival of the fittest. To this day he does not drink anything with dinner because pausing for a sip of milk meant opening your defenses for fraternal purloining of poultry. Red meat is a big deal to my dad; it was a rare treat as a child due to its cost. He loves filet mignon with a baked potato and some darkly sautéed onions. Once when I ate a deliciously massive veggie salad for dinner I was told that if a meal didn’t contain meat it wasn’t a meal at all- “it’s a saaalaaad”. He has also told many a waitperson to hold the lettuce and tomato for his burger because “if I wanted a salad I would have ordered one”. This same man also once ordered two vanilla Fribbles at Friendlys one evening- one for an appetizer, one as an entrée. He skipped dessert. Yes he has high cholesterol, why do you ask?

I remember Mary’s Hungarian Goulash! 1st time I had it, she made it. Still one of my Favorite dishes. Hope you enjoyed your sketty&sticks …
-From comment on my father’s above status update

Hungarian Goulash is the Benedict Arnold of meals to my sisters and me- notorious and widely reviled. I recall the stringy cubed beef, the brown sauce of unidentifiable origin, and the limp egg noodles creating a starchy nest of comfort that was not deserved by what was heaped atop it. I would desperately poke at the edges of this mass, searching in vain for virgin noodles unsullied by the insidious sauce.

I now understand that in many circles goulash is considered a delightful comfort food, even a delicacy. I see it on menus at very nouveau restaurants and diners. My mother-in-law (an excellent cook) assures me that it is indeed a lovely meal when made well. My sister once asked my mother what was in her goulash. An excerpt of the conversation:

Sister: “What exactly was in that?”
Mom: “Well, a whole bottle of ketchup…”
Sister: “I’m gonna stop you right there.”

I do not mean to pick upon my parents unfairly. My mother makes a delightful baked ziti that the neighborhood kids would devour. Chicken parmigiana was always delicious, and my father’s holiday turkey and potato stuffing are legendary. My sister attempts to re-create my mother’s meatloaf for her husband, only to be told time and time again that she’s close, but no cigar. Yet it is in many ways the foods I disliked that stay with me. I still harbor an aversion to fish, which given that all I had as a kid had been previously frozen into Piscean icebergs is rather understandable. I distrust sauces that don’t come with lengthy descriptions discounting ketchup as a main ingredient. I hate blue cheese, because blue cheese just sucks.

I’ve gotten to be an okay cook in the last few years. I can follow a recipe like nobody’s business, but I hope to someday be like my husband. He’s very good at just opening up the pantry and throwing some stuff together to make a meal. I have to plan, make sure I have all the ingredients, follow each step religiously to ensure an acceptable result. My current specialty is a short rib tagliatelle dish by Giada DeLaurentiis. It is a slow-cooked meal that simmers for hours, filling the house with the smell of rosemary, roasted tomatoes and basil. I usually make it on weekends so I can enjoy the aroma, and a glass of wine as it cooks. I have two little girls and I like to think they are absorbing it all- the flavors, the scent, the taste of the finished product. Perhaps it will be their food memory, helping me measure spices and stir the sauce, then spending the afternoon playing while dinner simmers away.

The girls are remarkably good eaters, but of course they like to whine every so often about what I’ve made. Perhaps I should give them something to complain about and make goulash tomorrow night for dinner. That’lll teach ‘em.